Blue sapphire belongs to the mineral species corundum. It can be pure blue but ranges from greenish blue to violetish blue. The name “sapphire” can also apply to any corundum that’s not red and doesn’t qualify as ruby, another corundum variety.

Deep, intense, velvety blue is the best way to describe the color of this sapphire from the Kashmir region on the India/Pakistan border. - Courtesy Edward Boehm, JOEB Enterprises, Chattanooga, Tennessee 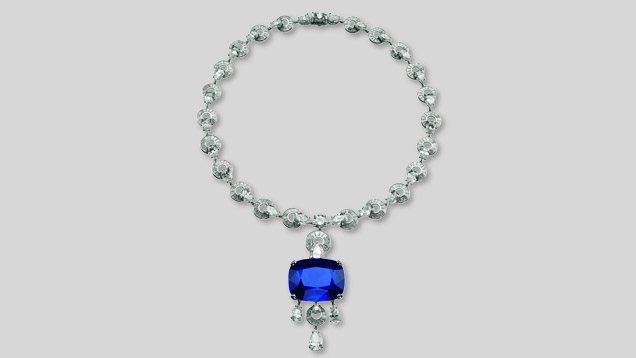 Most people who think of sapphire picture the color blue. - Courtesy Bulgari
Besides blue sapphire and ruby, the corundum family also includes so-called “fancy sapphires.” They come in violet, green, yellow, orange, pink, purple, and intermediate hues. There are also “parti-colored” sapphires that show combinations of different colors. Some stones exhibit the phenomenon known as color change, most often going from blue in daylight or fluorescent lighting to purple under incandescent light. Sapphires can even be gray, black, or brown. 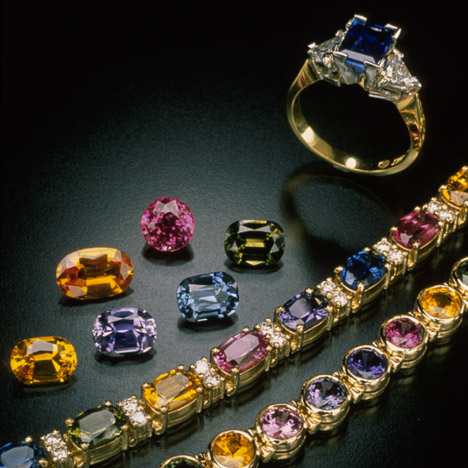 Stunning jewelry designs can be created by combining different sapphire colors.
- Jeff Scovil
Fancy sapphires are generally less available than blue ones, and some colors are scarce, especially in very small or very large sizes. Still, fancy sapphires create a rainbow of options for people who like the romance associated with this gem, but who also want something out of the ordinary. 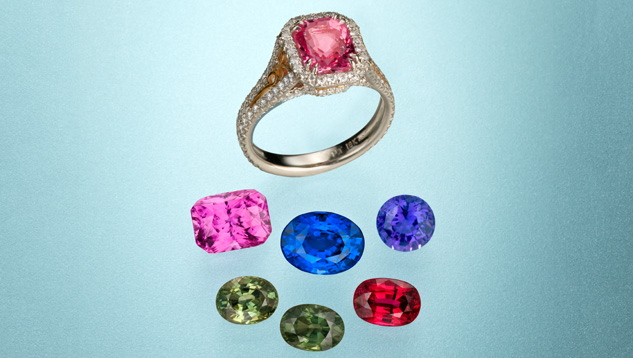 Sapphires come in every color except red. Red corundum earns the name “ruby.” - Courtesy Omi Gems, Inc. Los Angeles, CA, USA
The mineral corundum is composed only of aluminum and oxygen, and it requires a growth environment that’s free of silicon. However, silicon is a very common element, making natural corundum relatively uncommon. In its purest state, corundum is actually colorless. Colorless sapphires were once popular diamond imitations, and they’ve staged a comeback as accent stones in recent years.

But colorless corundum is rare. Most corundum contains color-causing trace elements. When the trace elements are iron and titanium, the corundum is blue sapphire. Only a few hundredths of a percent of iron and titanium can cause the color, and the more iron the corundum contains, the darker the blue. Chromium can cause the red color of ruby or the pink of pink sapphire.

In the 1990s, discoveries in East Africa and Madagascar brought fancy sapphires widespread recognition. The new sources supplemented production from traditional ones like Sri Lanka and Madagascar and increased the availability of yellows, oranges, pinks, and purples.

Corundum can show a phenomenon called asterism, or the star effect. This phenomenon usually appears as a six-ray star pattern across a cabochon-cut stone’s curved surface. The star effect can be seen in ruby or any color of sapphire, and it arises from white light reflecting from numerous tiny, oriented needle-like inclusions.

Both blue and fancy sapphires come from a variety of exotic sources including Madagascar, Tanzania, Sri Lanka, Myanmar, and Australia.