Those born in January are lucky to have the beautiful and diverse garnet as their birthstone. Garnets are commonly red but also come in an extraordinary range of beautiful colors, including orange, yellow, purple and vibrant green. There are even garnets that change color from blue to purple in different lighting. Some believe the true value of the garnet birthstone is its power to bring the wearer good health, wealth and happiness.

The name “garnet” originates from the medieval Latin granatus, meaning “pomegranate,” in reference to the similarity of the red color. Garnets have been used since the Bronze Age as gemstones and abrasives. Necklaces studded with red garnets adorned the pharaohs of ancient Egypt. Signet rings in ancient Rome featured garnet intaglios that were used to stamp the wax that secured important documents. The clergy and nobility of the Middle Ages had a preference for red garnets.

Garnet is actually a group of several minerals. Five of these – pyrope, almandine, spessartine, grossular and andradite – are important as gems. Pyrope and almandine range from purple to red. Spessartine is found in exciting oranges and yellows, while andradite is mostly yellow to green (the gem variety demantoid). Grossular may have the widest range, from colorless through yellow to reddish orange and orangy red, as well as a strong vibrant green called tsavorite.

The Smithsonian’s antique pyrope hair comb is one of the most famous pieces of garnet jewelry (pyrope is from the Greek pyrōpos, which means “fiery-eyed”). A large rose-cut garnet sits at the crest, much like a queen serenely surveying her court. The pyrope garnets that decorate this tiara-like jewel came from the historic mines in Bohemia (now part of the Czech Republic), and these rich red beauties were extremely popular during the Victorian era (1837–1901), when this piece was fashioned. 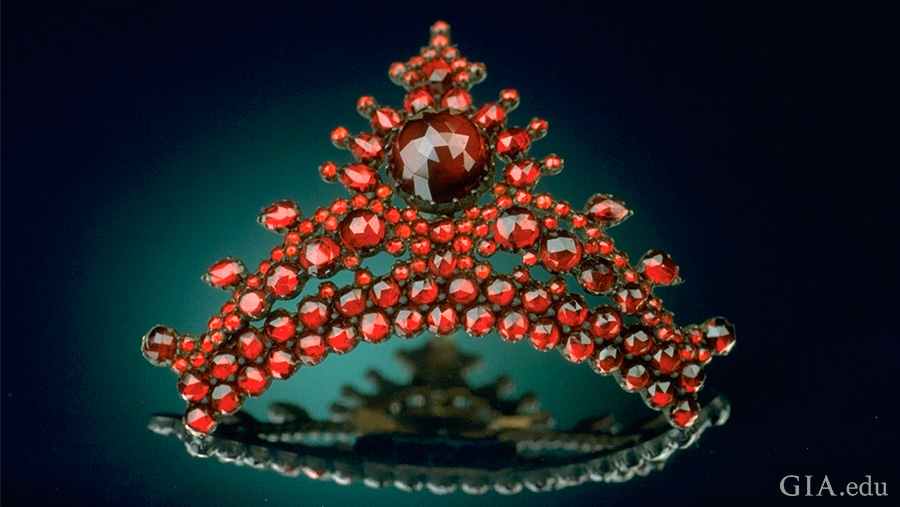 This antique pyrope garnet hair comb is part of the National Gem Collection at the Smithsonian Institution.

Curious about your garnet birthstone’s reputed health benefits? According to Indian astrology, garnet helps eliminate negative feelings (depression, guilt) and instill greater self-confidence and mental clarity to promote creative thinking and peace of mind. In ancient and medieval times, gems like garnet were also thought to be remedies for inflammatory diseases and to soothe the angry heart.

WHERE IS GARNET FOUND?

Garnets come from many different regions and countries. Bohemia was the primary source of the red pyrope garnets so popular during Victorian times. In 19th century Russia, green demantoid garnets from the Ural Mountains were prized by the Russian royal family and used by the great jeweler Peter Carl Fabergé (1846–1920). Today, the African continent supplies much of the world’s garnet. Namibia is now producing demantoids, and most of the bright green tsavorites in the market come from Kenya, Tanzania and Madagascar. Namibia and Tanzania are also key sources of the rich orange-to-yellow spessartine garnets. For many years, Southern California’s Little Three mining area was known for producing this spellbinding gem, The birthstone for January is also found in Myanmar, Brazil, Iran, Afghanistan, Pakistan, India and Sri Lanka, among other countries.

Small-scale artisanal miners, such as this tsavorite miner near Voi, in Kenya, are estimated to supply some 80% of the world's gems. Photo: Robert Weldon/GIA

The different types of garnet range between 6.5 and 7.5 on the Mohs scale of hardness. This means that this birthstone is more susceptible to damage than rubies, sapphires and diamonds. So while not all garnets are good candidates for daily wear, they are ideal for earrings, brooches and pendants. Give thought to how you store your garnet jewelry. If you let it rub against harder gems – again, think diamonds, rubies and sapphires – it can be scratched. And in turn garnet can scratch softer gems, such as opals or pearls.

Most garnets are not treated. Rarely, however, some garnets might be fracture filled, whereby treaters try to improve the apparent clarity of the gem by filling surface-reaching breaks with a glass-like substance. Such treated stones require special care. Regardless, use of a soft brush with warm soapy water is always safe for cleaning garnets. Ultrasonic cleaners are usually safe, except for stones that have fractures or have been fracture filled. Steam cleaning is not recommended. 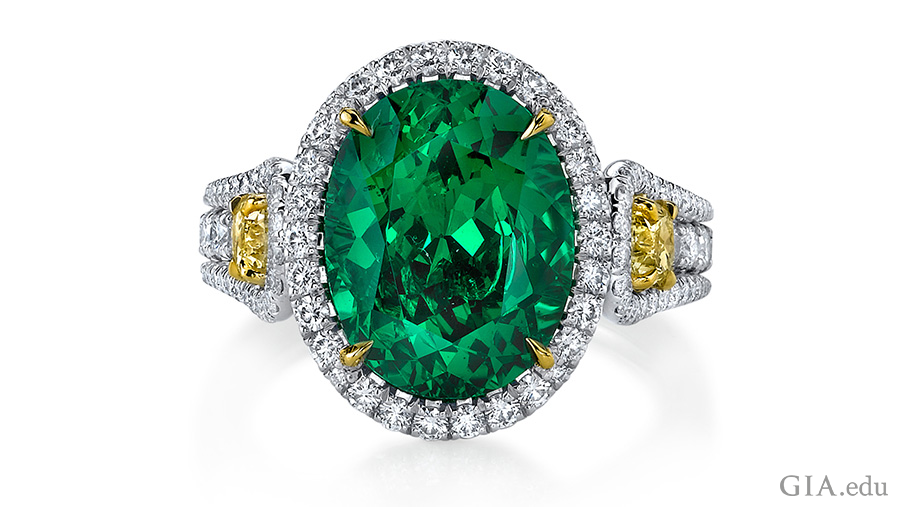 Whether you’re shopping for the January birthstone, or a gemstone to celebrate your 2nd wedding anniversary, be sure to review our Garnet Buying Guide. It has the essential tips you need to find the perfect garnet. Take it with you, and shop with confidence.