Ruby is one of the only four precious stones and has been valued highly among aristocrats, royalties The finest ruby has a pure, vibrant red to slightly purplish red color. In most markets, pure red colors command the highest prices, and ruby with overtones of orange and purple are less valued. The color must be neither too dark nor too light to be considered the finest quality.

Ruby can command the highest prices of any colored gemstone. The per-carat prices of fine-quality rubies have been rising consistently, many times breaking auction records.

The per-carat price of ruby can also increase dramatically as size increases, especially for better-quality stones.

THE COLOR OF RUBY 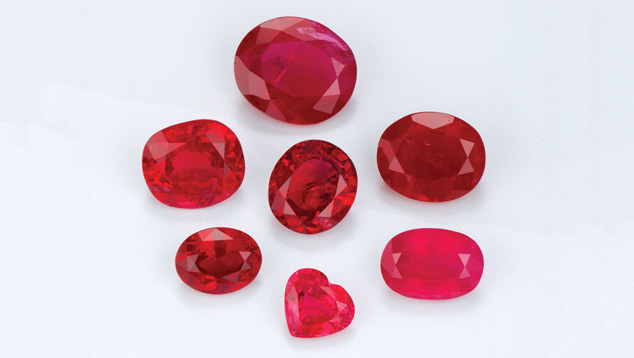 Color is the most significant factor affecting a ruby’s value. The finest ruby has a pure, vibrant red to slightly purplish red color. In most markets, pure red colors command the highest prices, and ruby with overtones of orange and purple are less valued. The color must be neither too dark nor too light to be considered the finest quality. If the color is too dark, it has a negative effect on the stone’s brightness. At the other extreme, if the color is too light, the stone may be considered to be a pink sapphire, even if color strength or intensity is high. That said, pink sapphires enjoy a following, at a far more competitive price than rubies. Ultimately, the most desirable color of ruby is the one you prefer the most.

The Difference Between Pink Sapphire and Ruby

Some gem dealers debate the borderline between ruby and pink sapphire. Historically, the word ruby referred to shades of red, which technically included pink. There are also cultural differences in the interpretation of ruby versus pink sapphire. In some gem-producing nations such as Sri Lanka, pink colors were always considered ruby, while in many consuming countries it is classified as pink sapphire.

The GIA Laboratory uses a controlled set of comparison stones called master stones to determine if corundum is ruby The laboratory grades its master stones on the principle that red must be the dominant hue before a stone can be called a ruby. In the gem trade, though, pinpointing the dominant hue is subject to personal perception.

Historically, the term “pigeon’s blood” described the red to slightly purplish or pinkish-red color of rubies with a soft, glowing, red fluorescence.

Traditional descriptions like these are useful for evoking images and describing color among professionals. But they can be subject to misinterpretation when used to describe a ruby’s actual color.

Over time and years of experience trade terms can conjure up perceptions of certain colors and qualities that are associated with a stone’s source. However, the qualities might be typical of that source or they might represent the finest stones from that source.

A single source never yields gems that are all the same color and quality. In fact, the descriptive trade term might represent only a small, yet highly desired percentage of stones from that source.

New sources can produce material very similar to rubies from classical localities or present a slightly different appearance, but remain just as beautiful. 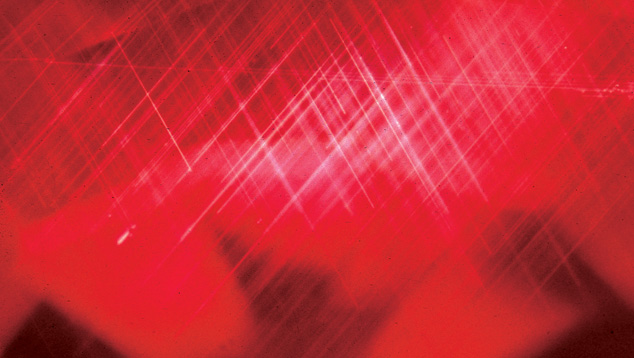 Intersecting needles of the mineral rutile create a common ruby inclusion called silk. When they are intact, they prove the ruby was not heat-treated at very high temperatures. It’s still possible that lower-temperature heat treatment might have occurred. Photo: John I. Koivula, GIA.

People in the trade expect rubies to have at least some inclusions because inclusion-free rubies are practically nonexistent. Ruby value can depend on how visible the inclusions are. Obvious inclusions, or inclusions that reduce transparency or brightness, lower a ruby’s value dramatically.

If large and prominent inclusions are located under the table facet, they greatly diminish the transparency, brilliance, and value of the stone. Inclusions can also limit a ruby’s durability. Significant surface-reaching fractures can pose durability threats.

Typical ruby clarity characteristics include thin mineral inclusions called needles. When the mineral is rutile and needles are present in intersecting groups, it is called silk. Needles might be short or long and slender, and they might appear to be woven tightly together.

Ruby can also contain needles composed of other minerals, small crystals, zones of color variation, or inclusions that resemble fingerprints.

Some inclusions can actually contribute positively to a gem’s appearance. The presence of rutile silk causes light to scatter across facets that might otherwise be too dark. This adds softness to the color and spreads the color more evenly across the ruby’s crown.

Needles that intersect can also cause the star effect, called asterism, when the stone is cut with a curved upper surface, called a cabochon cut. 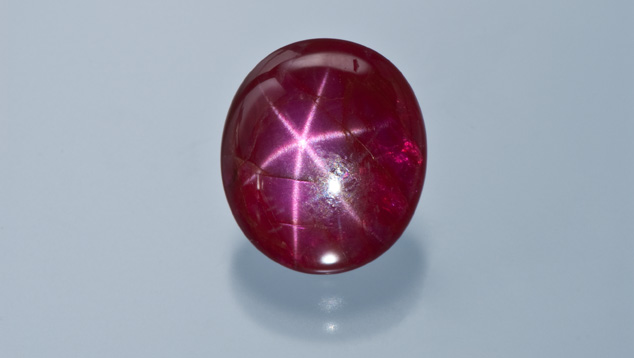 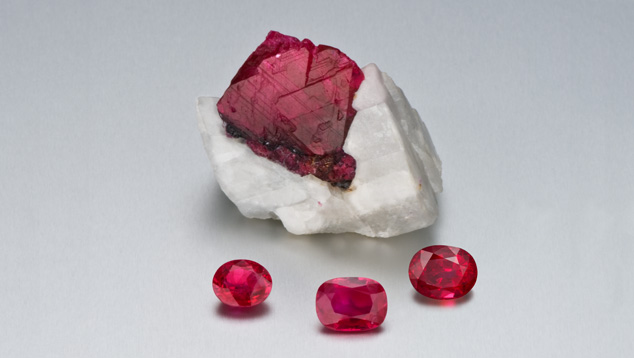 Several factors affect the cut and proportion of rubies on the market. A ruby’s crystal shape dictates its suitability for certain cuts. The most common shape is a flat tabular hexagonal shape, but ruby crystals from some sources can be elongated.

To accommodate these crystal shapes, the most common shapes of fashioned rubies are ovals and cushions, with brilliant-cut crowns of kite-shaped and triangular facets, and step-cut pavilions with concentric rows of rectangular or square facets.

Round, triangular, emerald-cut, pear and marquise rubies are also available. But these shapes are rare in larger sizes and higher qualities.

Ruby rough is very expensive, so many cutters try to conserve as much weight as possible. They might fashion flattened ruby rough into shallow stones, even though light escapes through flattened pavilions, causing an unattractive see-through area in the stone called a window.

Pleochroism—the appearance of different colors in different crystal directions—is another factor that influences cut. In ruby, it typically appears as red to purplish-red in one crystal direction and orangy red in the other. Cutters can minimize the orangy-red color by orienting the table facet perpendicular to the long crystal direction. Even so, it’s not always possible to orient a ruby for ideal color return because the potential loss of weight would be too great.

These rubies were all mined in Myanmar (formerly known as Burma). The faceted stone weighs 11.55 carats and the rough stones weigh between 16.65 carats and 278.50 carats. Photo: Robert E. Kane/GIA.

Fine-quality rubies over one carat are very rare, but commercial-quality rubies are commonly available in a wide range of sizes. The price per carat goes up significantly for ruby as it increases in size.