If you were born in February, your birthstone is amethyst – the purple variety of quartz that has captivated mankind for millennia. Its lilac to deep purple hues can be cut into many shapes and sizes, and it can be manufactured in a lab as well as mined. Amethyst, the February birthstone, can be found in the collections of royal families throughout Europe and Asia. Now it’s within reach of most consumers. Consider buying a stunning amethyst for the king or queen of your heart – or treat yourself to a royal present. If your birthday is in February, then wearing an amethyst can also be a symbol of personal empowerment and inner strength.

The name “amethyst” derives from the Greek amethystos, which means “a remedy against drunkenness,” a benefit long ascribed to the purple birthstone. Because of its wine-like color, early Greek mythology associated the gem with Bacchus, the god of wine. Amethyst was also believed to keep the wearer clear headed and quick witted in battle and business affairs. Renaissance Europeans thought it calmed lovers overrun by passion.

Amethyst is the gem traditionally given for the sixth wedding anniversary. Wear it in celebration of your wedding nuptials or as your February birthstone and you’ll be in royal company: Catherine the Great (Empress Catherine II of Russia, 1729–1796) had a penchant for the gem and decked herself in amethyst necklaces, earrings and other ornaments. The famous jewelry connoisseur Wallis, Duchess of Windsor (1896–1986), made a memorable statement when she wore a lavish Cartier-designed amethyst bib necklace to a gala in Versailles in 1953. 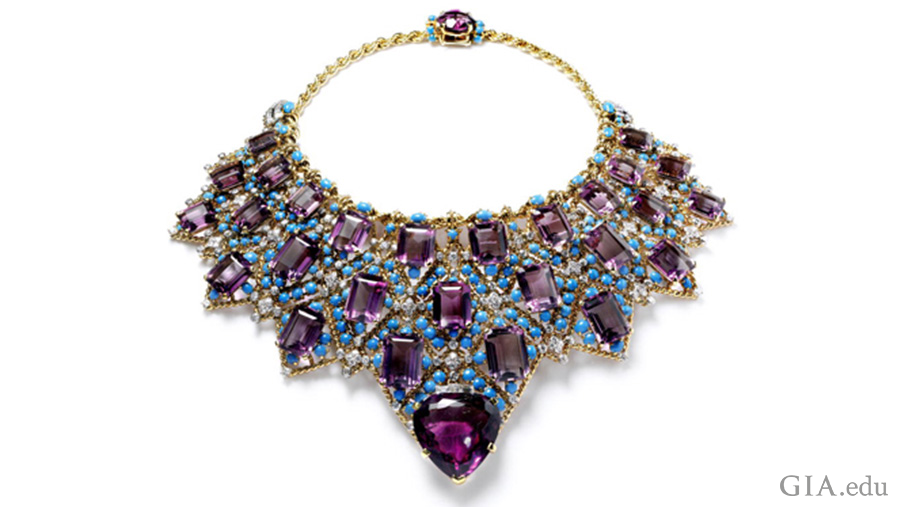 The Duchess of Windsor’s bib-style necklace boasts 28 step-cut amethysts, one oval faceted amethyst, and a large heart-shaped amethyst in the front, as well as turquoise cabochons and brilliant cut diamonds, all suspended from a rope-like gold chain. Courtesy: N. Welsh, Cartier Collection © Cartier

Historically, royals have admired the deep purple hue of the February birthstone since at least the days of Alexander the Great. Amethyst lore also includes several claims to mystical powers, including that it would convey strength and wit to those who wore it. If you celebrate a February birthday, wearing an amethyst can be a symbol of personal empowerment and inner strength.

WHERE IS AMETHYST FOUND?

Russia was the major source of amethyst until the 19th century, when large deposits were found in Brazil. Once as rare as ruby or emerald, amethyst was suddenly in abundance. Today, the most important sources of amethyst are in Africa and South America. Brazil is still  a major supplier, especially its southernmost state, Rio Grande do Sul, though the rough amethyst mined there tends to have a lighter color than amethyst found in other countries. Amethyst from Brazil sometimes forms in hollow, crystal-lined geodes so large you can stand in them.

The Anahí mine in Bolivia is another prominent source for amethyst. Hidden in the Pantanal wetlands, the Anahí mine is shrouded in fascinating lore. It was discovered by a Spanish conquistador in the 1600s, given to him as dowry when he married Anahí (a princess from the Ayoreo tribe), forgotten for three centuries, and rediscovered in the 1960s. The Anahí mine is also famous in gem circles as the source of the unusual bicolored amethyst-citrine crystals called ametrine. 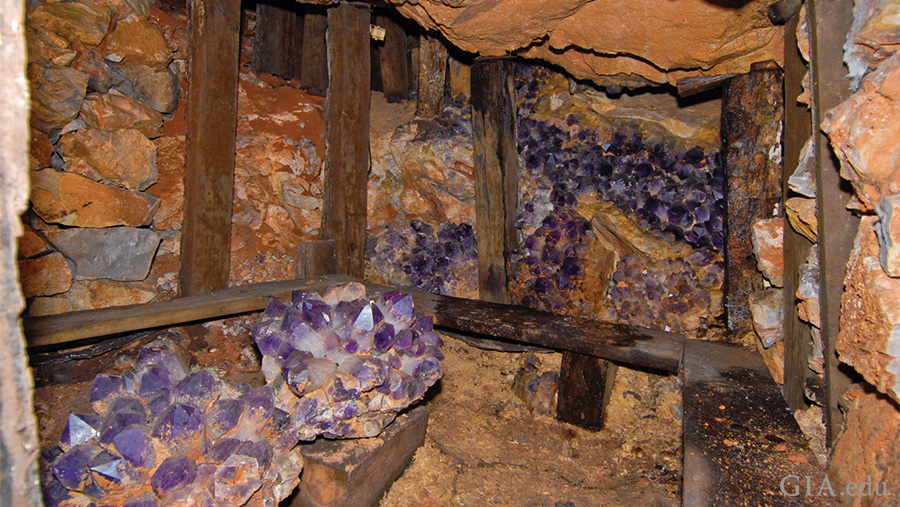 A treasure trove of amethyst and ametrine crystals line the walls of Bolivia’s historic Anahí mine. Photo: Robert Weldon/GIA

In Africa, Zambia’s Kariba mine is one of the largest amethyst producers in the world. Amethyst mined there tends to be of superb quality with richly saturated colors.

Amethyst is also found in the United States, just 46 miles (74 km) outside of Phoenix, Arizona. The Four Peaks amethyst mine is located high in the most rugged part of the Mazatzal Mountains. A remote location, hot summer temperatures, and a lack of water and power at the mine make for challenging conditions. Yet this jagged, arid, rattlesnake-infested terrain produces some very fine dark purple and purplish red amethyst crystals. 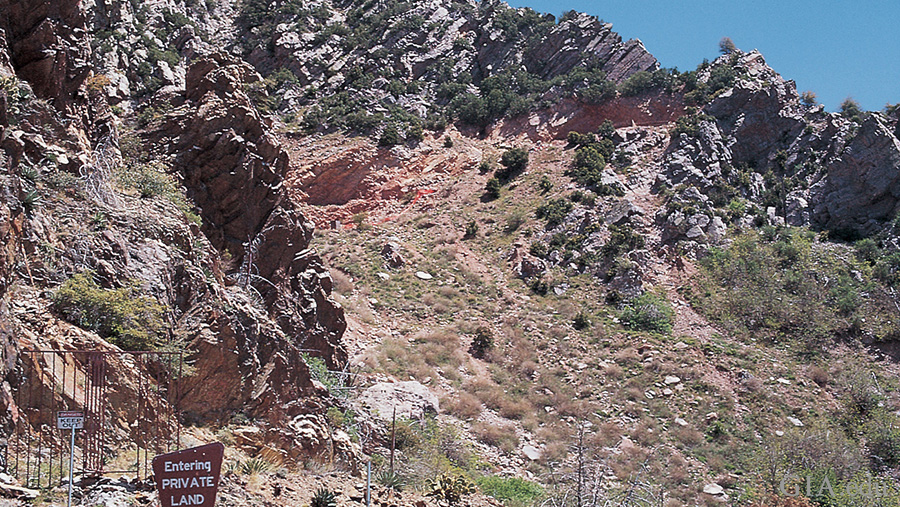 The Four Peaks amethyst mine is in a remote area northeast of Phoenix, Arizona. Photo: James Shigley/GIA

Amethyst is a 7 on the Mohs scale of hardness. This means that it is appropriate for daily use in rings and other jewelry, but over time it may show wear and require repolishing. Because this February birthstone is more susceptible to damage than harder gems such as rubies, sapphires and diamonds, you risk scratching your amethyst jewelry if you place it next to these harder stones...

Heat treatment is the most common technique for improving the color and marketability of natural amethyst. Heat treatment can’t make pale amethyst darker, but it can lighten the color of very dark amethyst and make it more attractive. It can also remove unwanted brownish inclusions in some amethysts. Some amethyst turns yellow – to citrine – with heat treatment.

Heat treating amethyst results in a permanent change in color. However, submitting it to intense heat may render it slightly more brittle than usual, and care must be taken not to damage pointed faceted corners and sharp edges. Note, too, that excessive heat can remove the color entirely, and some amethyst fades with prolonged exposure to strong light. Though the color is stable with normal use, this is not a birthstone to wear to the beach every day.

Amethyst birthstone jewelry can be cleaned with an ultrasonic cleaner, but steam cleaning is not recommended. A soft brush with mild soap is the safest option.

As you shop for the February birthstone, you’ll also encounter lab-created amethyst. Having the same chemical and physical properties as its natural counterpart, synthetic amethyst has been known since the 1970s. In some cases, it is very difficult to distinguish natural from synthetic amethyst without access to advanced gemological testing. The GIA Laboratory can tell the difference, but many in the jewelry industry do not request testing because of the cost and time required to determine the origin of what is a comparatively inexpensive gem. Still, merchants are required to tell you if a gem is natural or synthetic.

This amethyst and diamond ring set in recycled 18k gold is part of the Galaxy Collection, designed by Arya Esha. Courtesy: Arya Esha

Amethyst has enchanted kings and queens for many centuries. Now you know how to buy a royal gift for your love with a February birthday. And for some quick tips.